Since it's been so long since my last post, I'll start this with a quick catch up. After Turf Paradise finished in the spring, we went back to Colorado for the season at Arapahoe Park. We had a very good meet there and then opted to go to Zia Park in Hobbs, NM, instead of Phoenix, where we also had a good meet. There aren't any dressage barns there, but I found a nice western barn to board at. Little did I know, it was exactly what I needed. The barn owner/trainer is an amazing horsewoman and an even better person, now she's one of my dearest friends. I ended up leaving Hobbs with a completely different mentality about riding and now find more joy in it than I ever have before. We are currently in El Paso. I don't have much love for the city itself, but Sunland Park Racetrack is clean, nice, and feels much safer than when we were here the last time. I'm boarding at a friend's and am really happy there. The night the last load of horses arrived, Indy kicked the living hell out of Summer. At first we thought that she broke his hock, it was just horribly cut up. The vet stitched him up the best he could, saying they'd probably only hold for a few days. They lasted a week. So begins the saga... 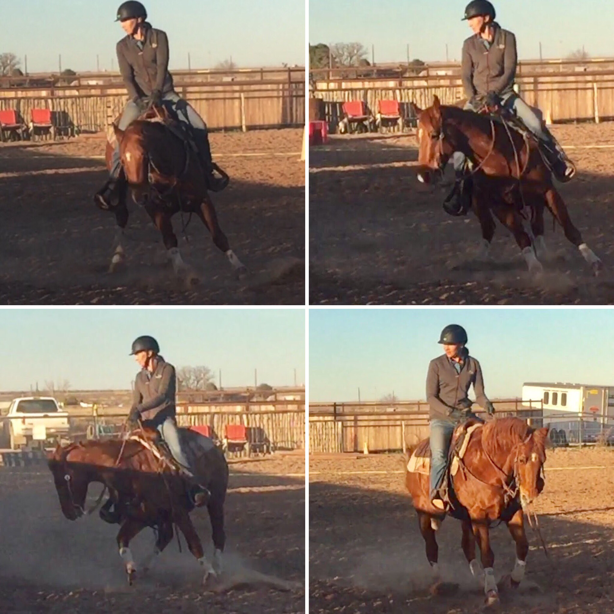 This is CD. He's pretty much the coolest horse ever. The little firecracker would squeal at the flag when he started working it. He wasn't hard to ride on the flag, but he'd get down and hit it when we worked cattle. He's quick! I came really close to eating dirt a couple times and have never had more fun almost falling off!

When your horse literally almost kills your other horse, it makes you angry. It was Indy's fault that I was standing there crying as I knocked on the vet clinic door at 7:30 pm on a Saturday, interrupting their Christmas party. It was because of her that my heart sunk as everyone in the clinic turned their back to me, clearly not wanting to be bothered, while Summer bled all over the place in the trailer.. None of the emergency clinics had returned my calls. This clinic was my best and only option and it wasn't looking like they were planning on helping my horse. It was beginning to look hopeless, all because of Indy. 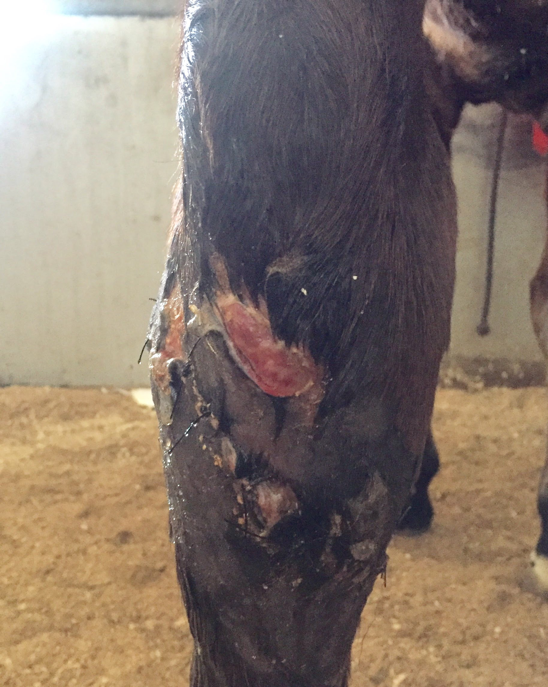 The stitches go along the inside of the hock too. 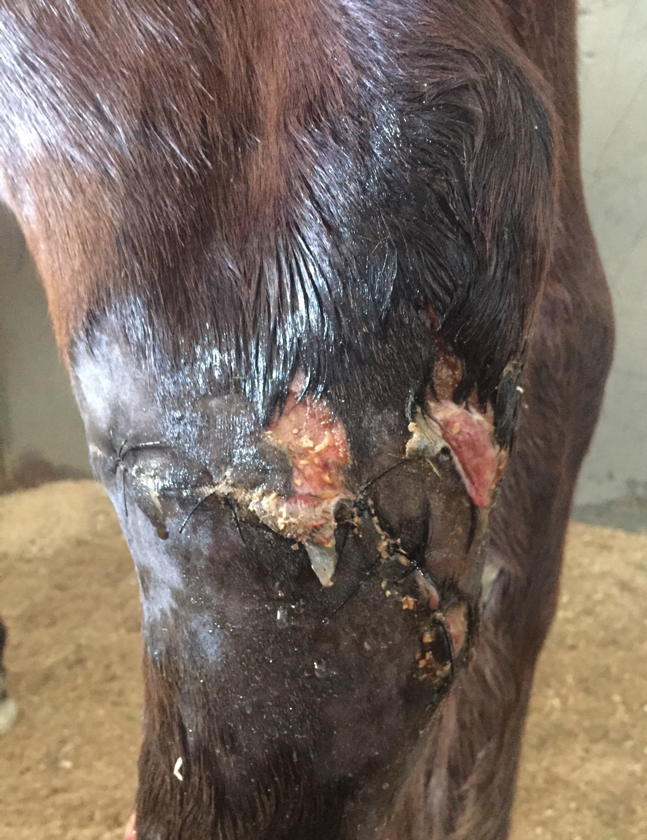 Before the stitches ripped out.

Fortunately, my friend showed up. Her husband had given me the vet's number and when they hadn't answered my knocks or call, he called the owner of the clinic, who wasn't in the room full of vets ignoring me at the time. The on-call vet finally opened the door and she was PISSED. I got to ride my friend's awesome QH  jumper while she was gone for Christmas. He's 17+ hands of awesomenes and you'd have a hard time believing he wasn't a WB if you saw him in person.

I stood there sobbing and apologizing, telling her I didn't know where else to go and that it really was a real emergency and that I certainly didn't want to be there interrupting their party. My friend stood her ground with the vet a bit more than I did, telling the vet that her husband was on the phone with the boss and that they needed to come out and help my horse. Then the owner popped his head out and saved me. We had used him when we were in El Paso before and had had a good relationship then. He's a good vet.

Even though I know I wasn't wanted there, him and another vet were very kind. He offered us food, saying there was plenty. I couldn't eat, but it made The Fiancé happy. The on-call vet warmed up and started being nicer. She was fine by the time Summer was finished with X-rays and sewn up. She had been up for an ungodly amount of hours, so I can understand the grumpiness. Long story short, they got Summer patched up the best they could and he stayed at the clinic overnight. That left Indy. 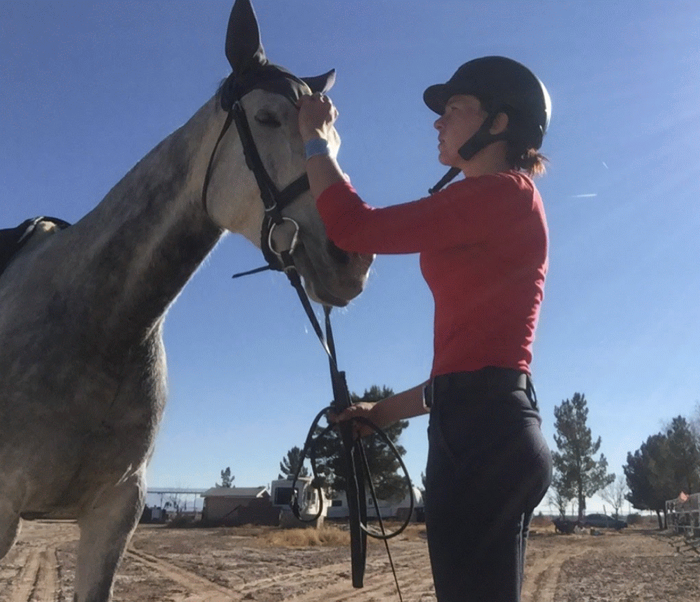 I still love the heifer.

I was a little less mad at her once I learned that Summer's hock wasn't broken. At least, I got to the point where I quit threatening to kill her. She was just being a horse. I still gave myself a day to cool off, and to recover from the mental exhaustion from the night before, before riding her. Riding exhausted and infuriated is never a good combination.

That first ride was a tough one, mentally. I was still mad, but I knew that it wouldn't be fair to ride her angry. She obviously wouldn't understand why. The entire time spent tacking her up, I drowned out any thought of Summer with what I wanted to accomplish that day. Her first ride at a new place is always a challenge, my mind stayed on what excercises we needed to do to keep her focused. It was hard to separate the past from the present. That's where maturity comes into play because ten years ago, I probably wouldn't have been able to accomplish that. Detaching myself from the personal aspect and approaching that ride from a professional perspective was the only way we were going to get through it without a meltdown. 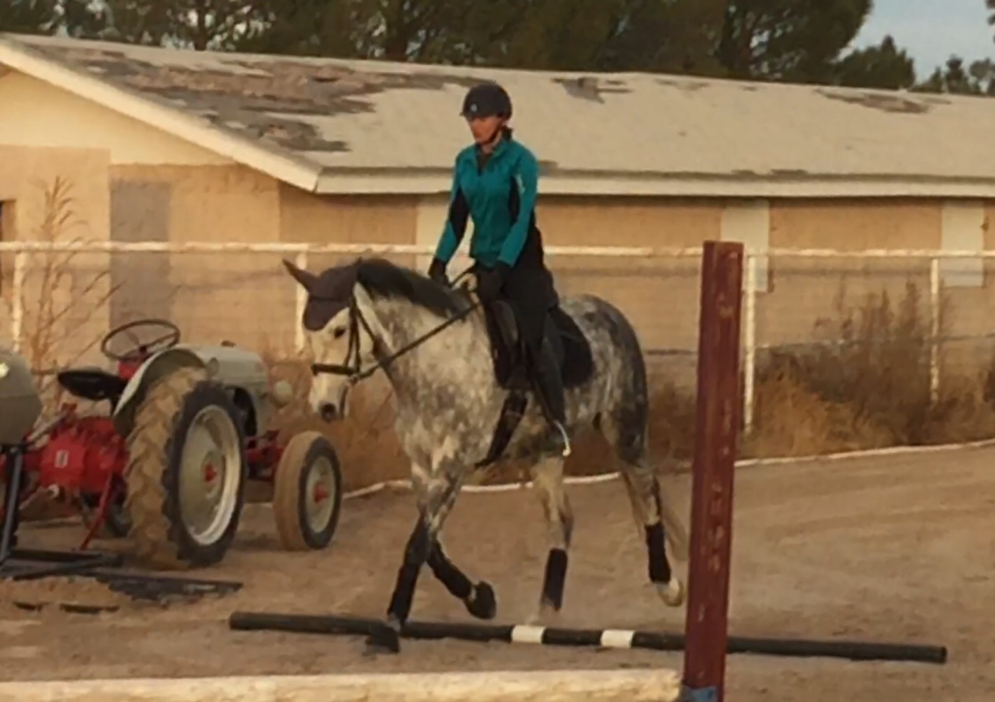 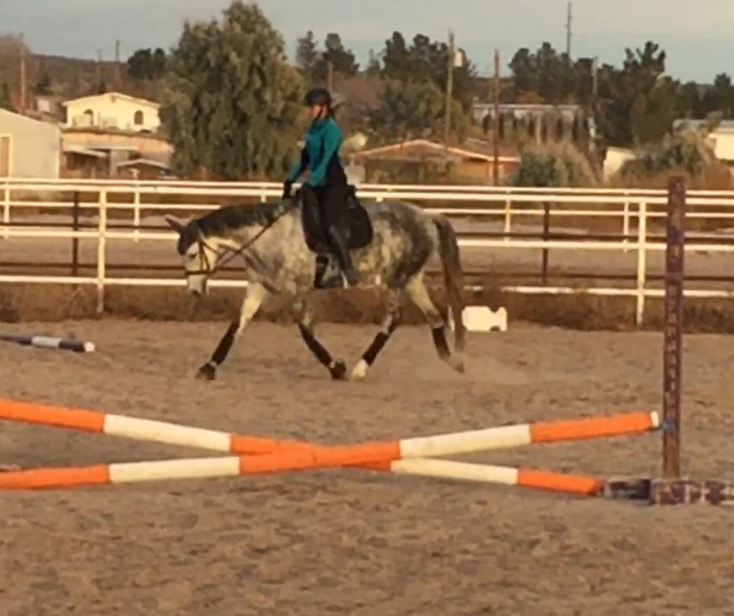 The moment I got on her, she wasn't my horse. My goals and dreams with her in the future no longer mattered. I wanted to work towards developing a horse that anyone can ride, that people would actually want to ride. One that was getting ridden hard enough to not have the energy to do nasty things. There was no more making excuses for her, absolutely no babying. She was going to work in a respectable manner. Key word WORK. I went from being the owner to being the trainer, no longer stressing over the injury that she was given way more than enough time to heal from. She became a job, not my pet.

Don't mind my hands. My neck injury had flared up and was bothering me really bad. I didn't have much strength in them to keep the reins from sliding some. We're still working on her not swinging her haunches in. We have a ways to go, but she's getting a lot better about it.

In a horrible way, she gave me the right mentality to actually accomplish what I want with her. Our rides are no longer spent with me wondering what she's going to spook at.  I'm done finessing around resistance. If Indy wants to flip her head and fight me, we gallop forward until she relaxes into my hands and gets over it. There's no more baiting me into a fight. Any antic she has thrown at me gets ignored and ridden through. She's expected to give me an honest attempt the first time I ask, not whenever she feels like it. She gets rewarded for the good, and the bad results in her working harder. Everything has become much more black and white. An honest effort is all that I'm really looking for while she gains her strength. Indy is allowed mistakes, she's allowed an opportunity to process things, and she's allowed a fair chance to comprehend what I want. She isn't allowed to flip me the bird and take over. 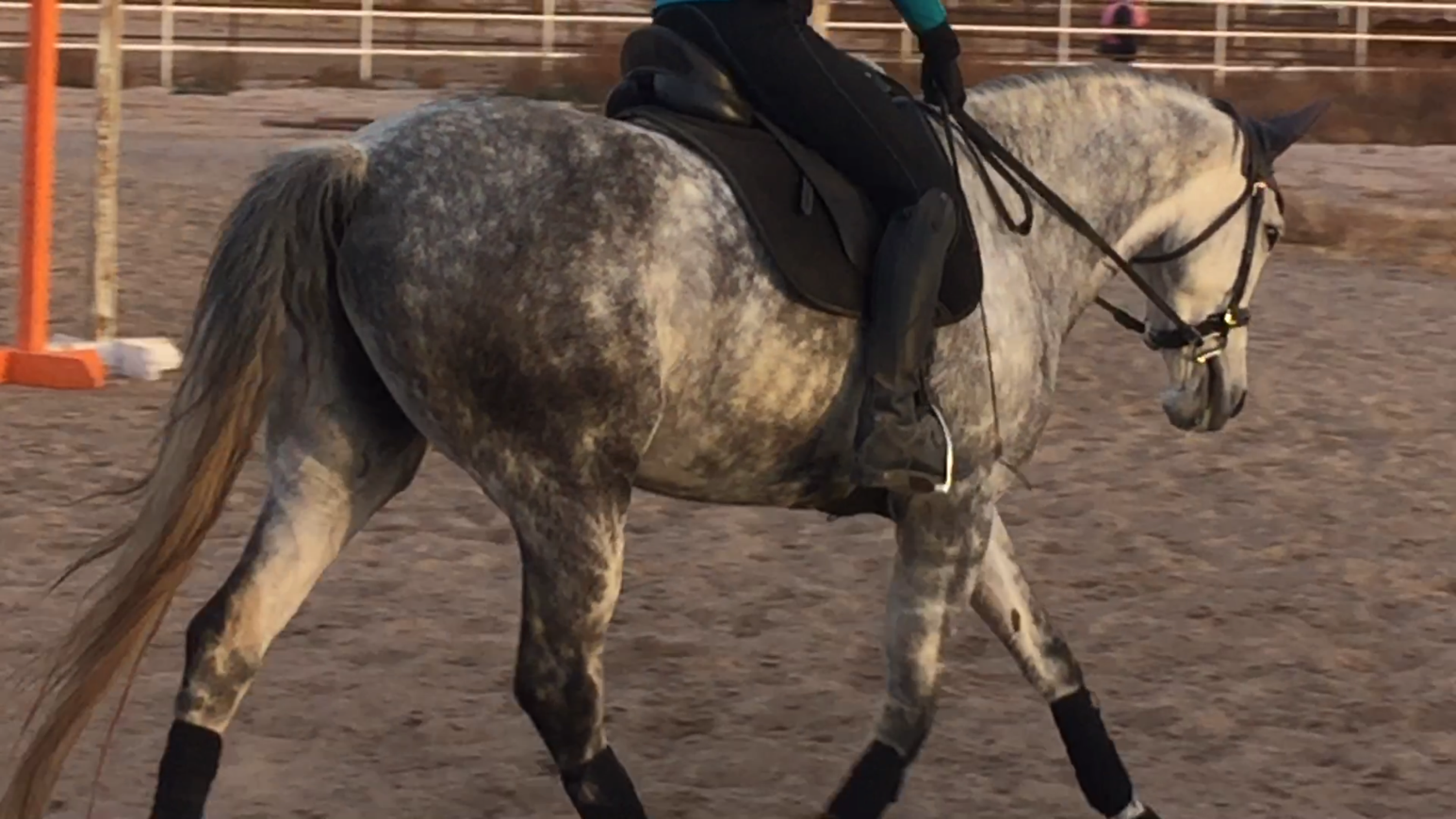 My trainer in Phoenix would often say that Indy was lucky to have me as an owner because not many people would be as patient with her as I was. I'm still patient, but the days of worrying about what she might do and trying to prevent it are over. There's no more avoiding the things that piss her off just because my only goal is for her to have a "positive experience". We've had nothing but good rides since she almost killed Summer. I haven't had to deal with very many behavioral issues. Indy loves the part of our warm-up where I go into two-point and let her really gallop forward. We're doing more canter work than we ever have and it's improved immensely. She's happy in her work. I'm braver and more confident on her than I have ever been. I'm proud of Indy every second I spend with her. The anger at her comes back out when I'm away. It comes every time I have to change Summer's bandage because you have to change a hock bandage frequently to keep it from sliding down. It hits me when I have to ace him to keep him calm in the stall because he hates being in a stall and gets frantic. I get disgusted with her while I'm hand-walking him and he seems so grateful just for the sunlight, when he puts his head against my chest for comfort, and when he's standing there drenched in sweat from stressing. I just make sure to separate myself from that anger every second I'm around her.

Has anyone else been in a similar situation? How did/would you cope with it?
Posted by Jodi at 4:26 AM