*This post contains a graphic image of an eye injury.

Wow! It’s been a long time. No excuses, I’m not even sure why I haven’t posted. Life in general, I guess. 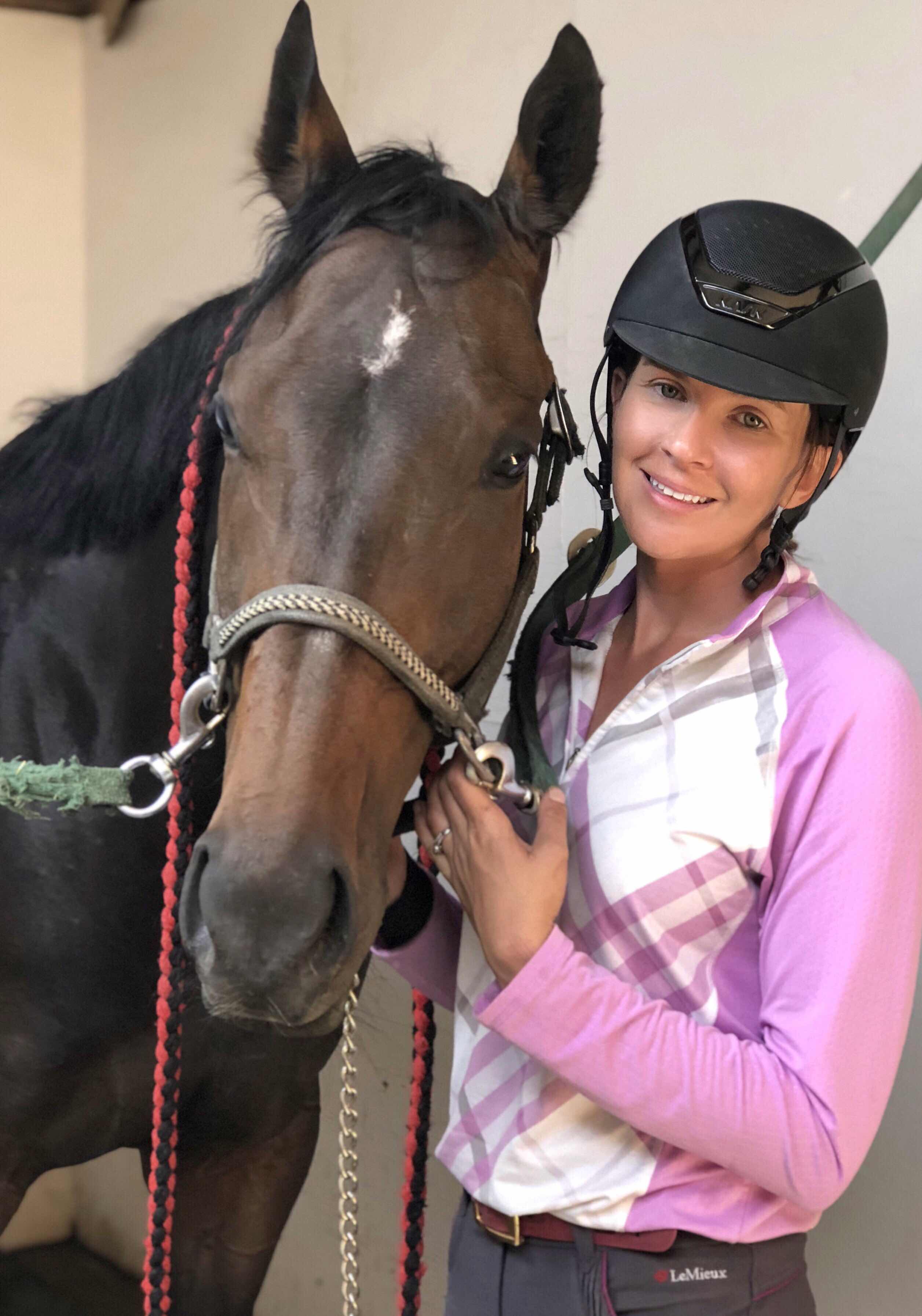 There’s not much need to backtrack, so I’ll just start with where I’m at now and introduce you to Ivan.

I sent in an application to be one of the trainers for the Retired Racehorse Project Thoroughbred Makeover. This hadn’t been  something that I had completely been planning on this year, but then Incremental came along. 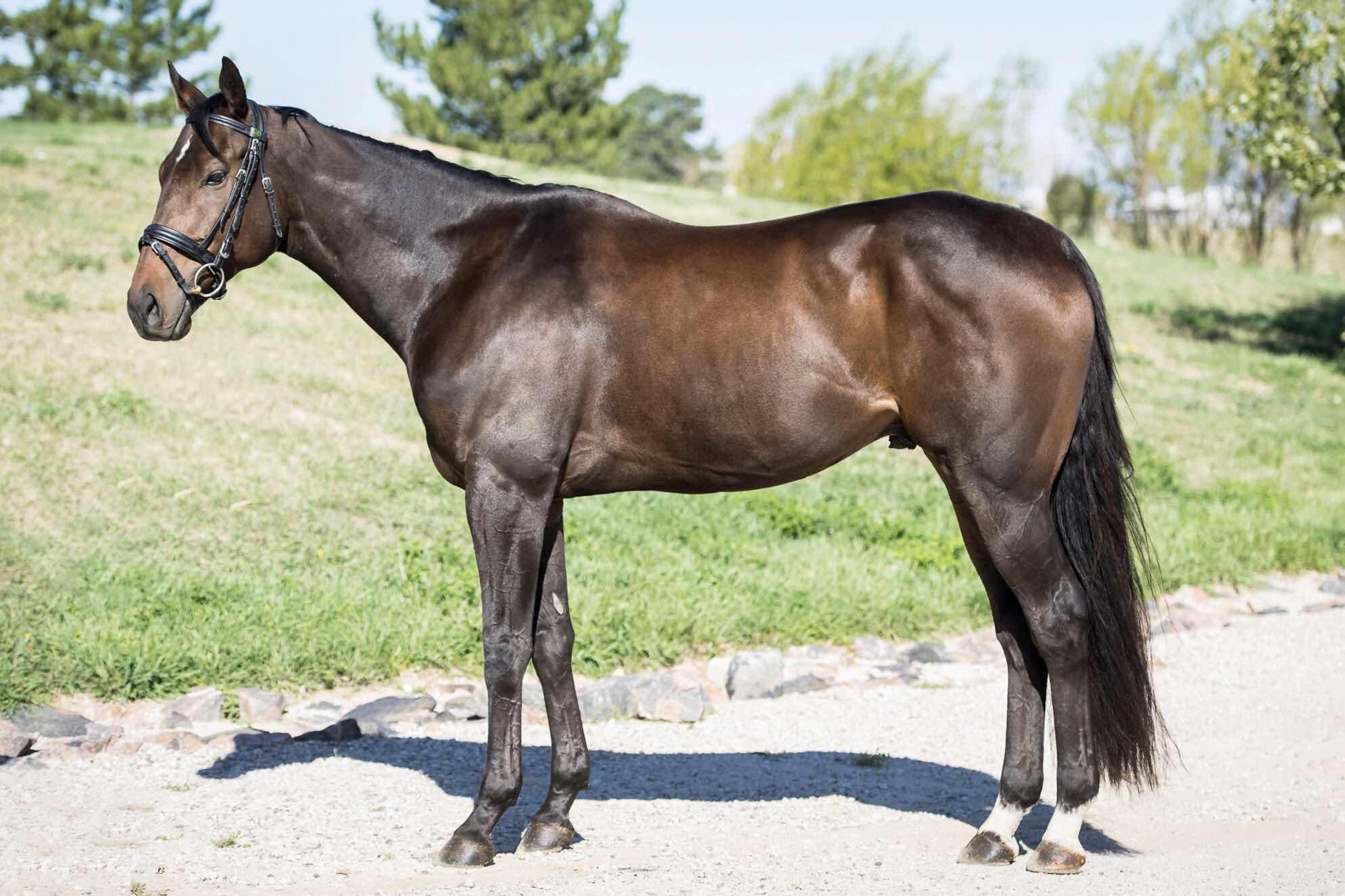 Okay, so he had been in our barn for over a year, but I didn’t own him. Last fall, Incremental (barn name Ivan), had won a race at Zia Park. He had gotten hit in the eye with a dirt clod during the race. It was clouded up and runny. Our vet spent a week treating him, but he continually got worse and the vet said to get him to a clinic. 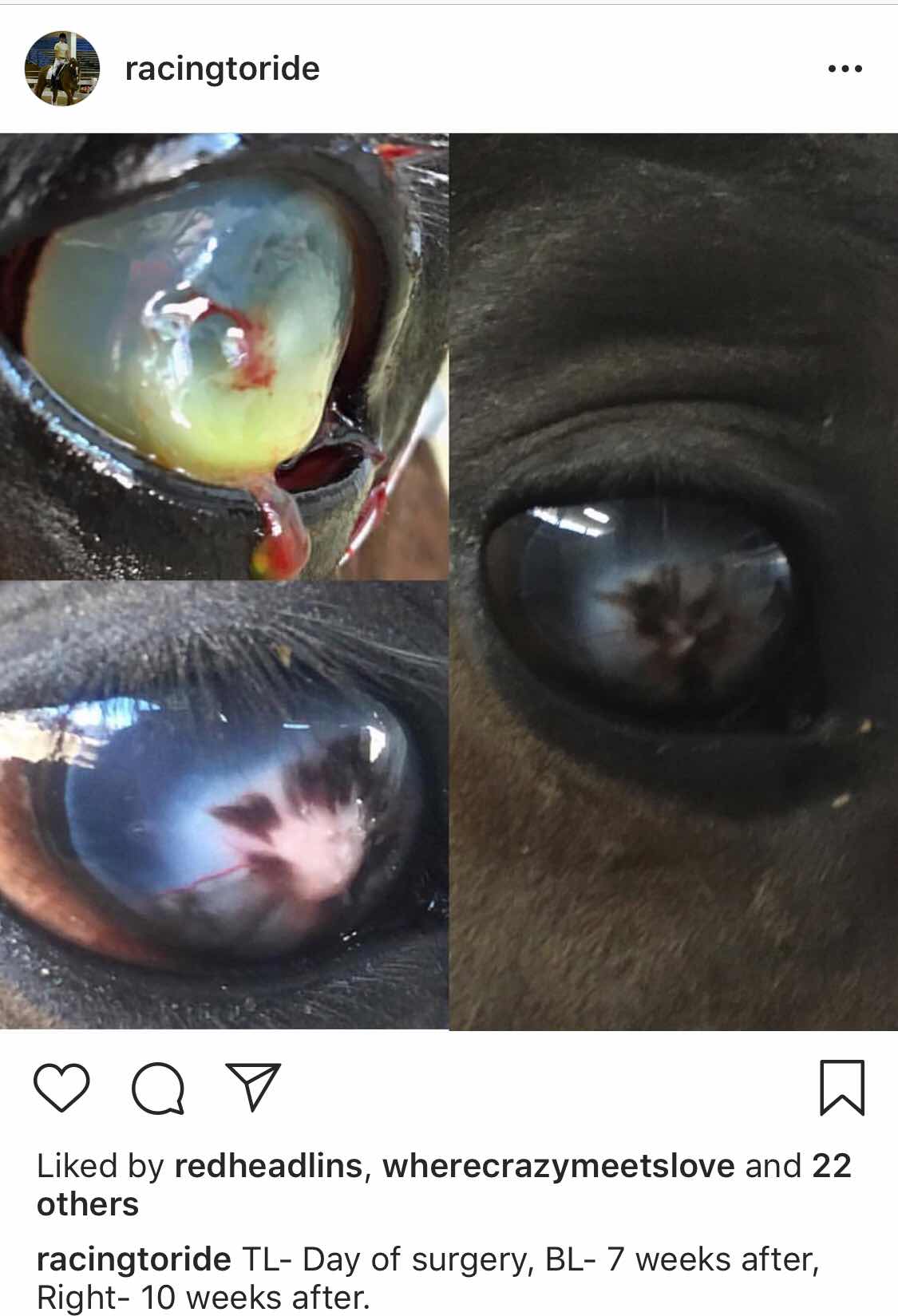 The vet at the clinic spent several days trying to save it. It wasn’t getting better. She called The Fiancé and Ivan’s owner to tell them that they could do surgery or remove the eye. Long story short, T.F. and I become Ivan’s proud new owners for the price of the future vet bill. We needed another horse like a hole in the head, but we decided to take him anyway. I’ve seen one eyed horses go on to do amazing things. Still, after talking to the vet and being given a 50/50 chance of being able to save his eye, we opted to do the surgery. She put in a corneal disc and the it gradually started to get better. After 45+ days in the clinic, Ivan was ready to come home. 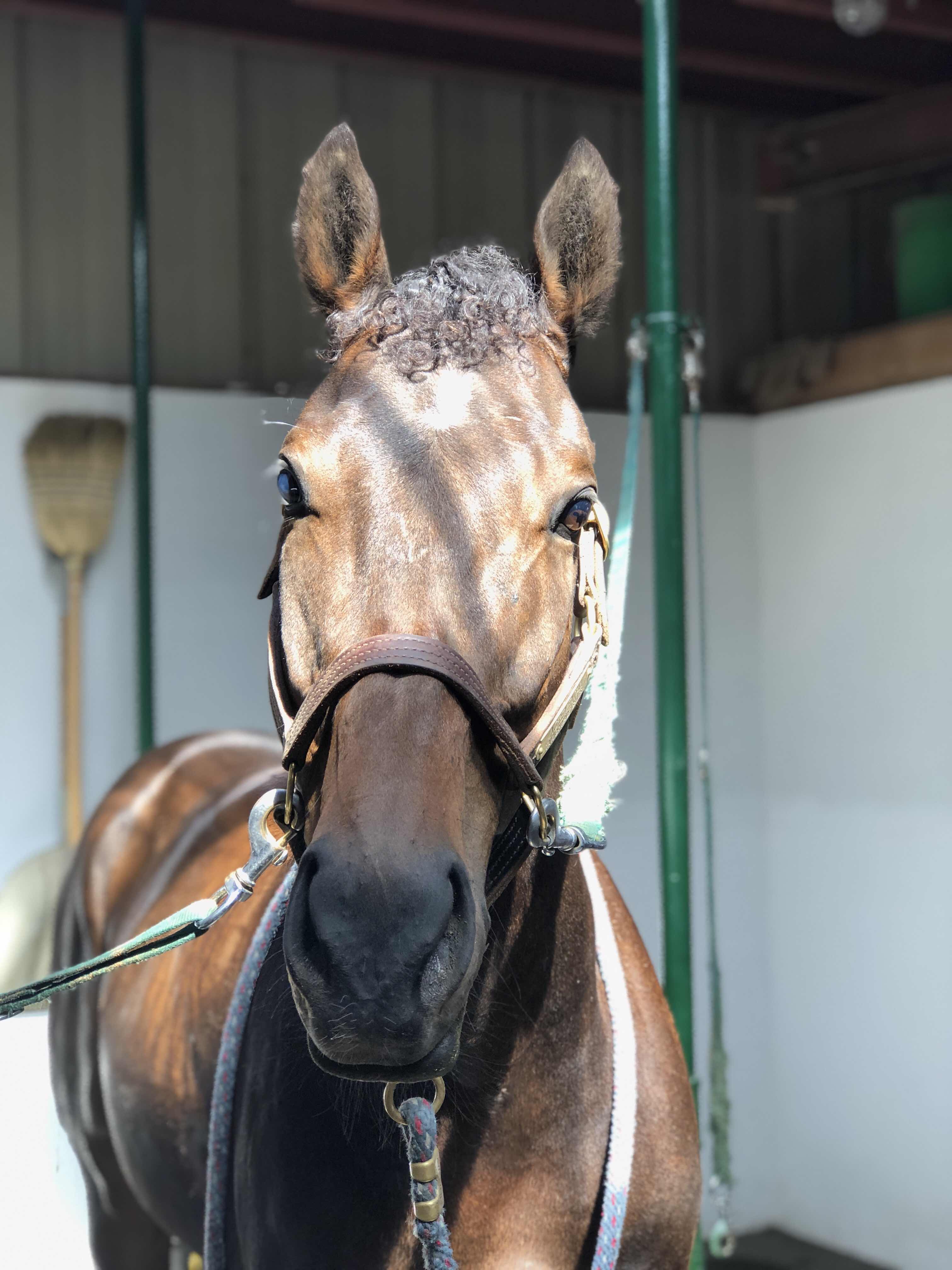 Good luck trying to say “No” to that face.

I guess that I should have started by saying that Ivan was T.F.’s favorite horse to train at the track. He adores that horse, even if Ivan didn’t win that often. The vet said that it wouldn’t hurt to try putting him back in training and see how he handled having not much vision (due to scarring) in that eye. We did and after a couple of days, he had adjusted like everything was normal.

When we agreed to take Ivan, my first thought was that I wanted to do the TB Makeover with him. T.F. and I had talked about how he would make such a nice saddle horse since he’d first come to our barn. It’s something I had wanted to do for years, but wasn’t sure when I would get the opportunity. The fiancé and I agreed that we would run him once and retire him immediately if he didn’t run well, but that he would retire no matter what (even if I didn’t get accepted for the TB Makeover) once the meet in Denver started.

His first race back after his eye injury. I was really proud of him from running as game as he did considering I thought that he’d need a race.

The Fiancé sewed a special cup on Ivan’s blinkers to protect his eye while training and racing and he won his first race back at Sunland Park. Then he won his next race. Then he ran 4th in a $75,000 Stake. Then he won another race and we retired him while he was still sound and healthy. 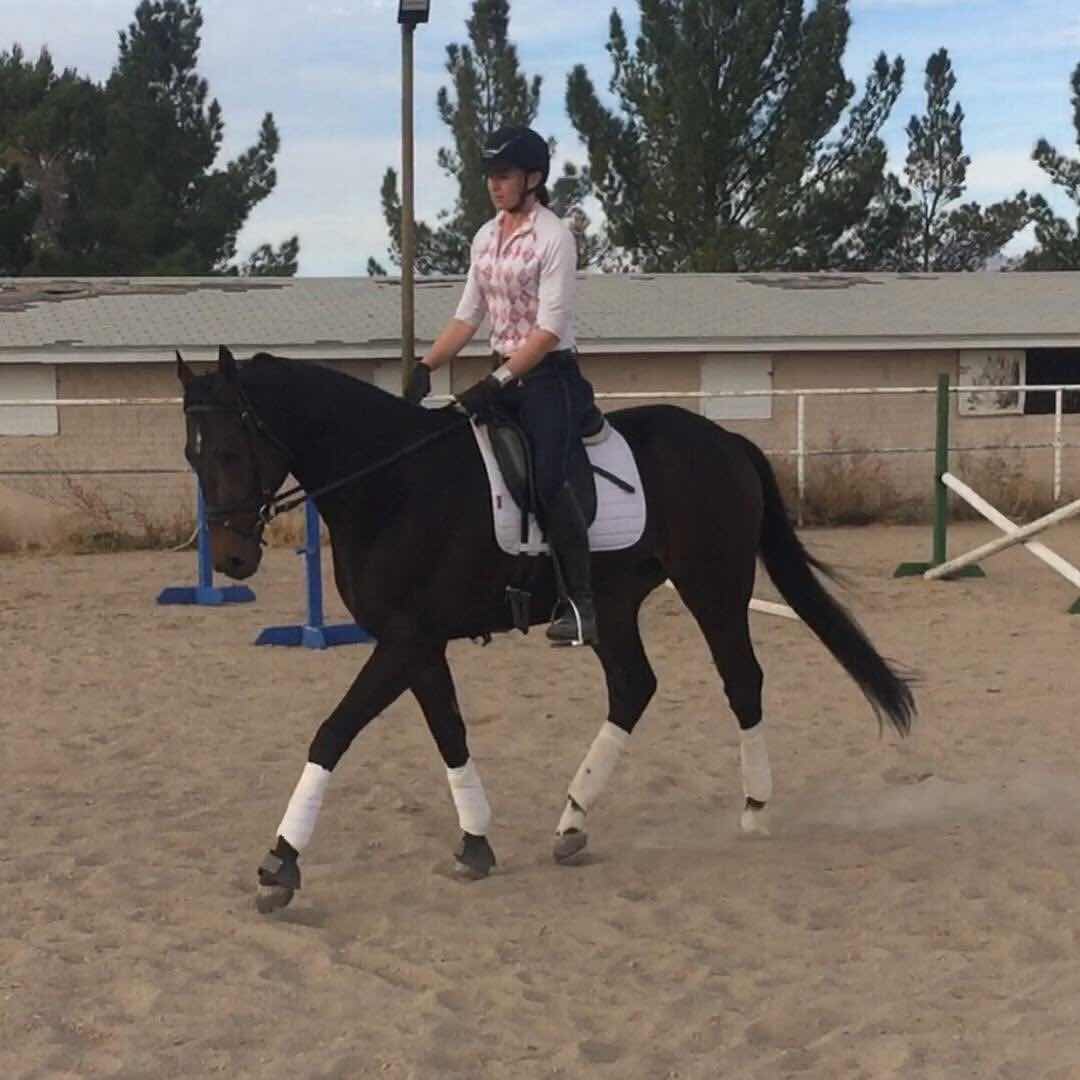 Ivan’s first dressage ride just after he won his first race back.

Once we were all moved in at Denver I took Ivan over to a H/J barn that I had boarded at before. While we were in El Paso, I had hauled him out to where I boarded Indy for his first dressage rides. It was pretty neat to be able to introduce a racehorse to dressage and have him win two more races at the same time! He began officially training for his second career in the middle of May, this year.

It’s been an adventure, one that I’m loving.  It’s not always easy to train a horse that has immediately left the track. Actually, it wouldn’t be that hard with Ivan if I didn’t have to aim for a deadline. I’m very happy with his progress in the last four months. It may not be enough to do extremely well in Kentucky, but it’s enough for us to go and have a great time while getting more experience. I’m just enjoying riding him. 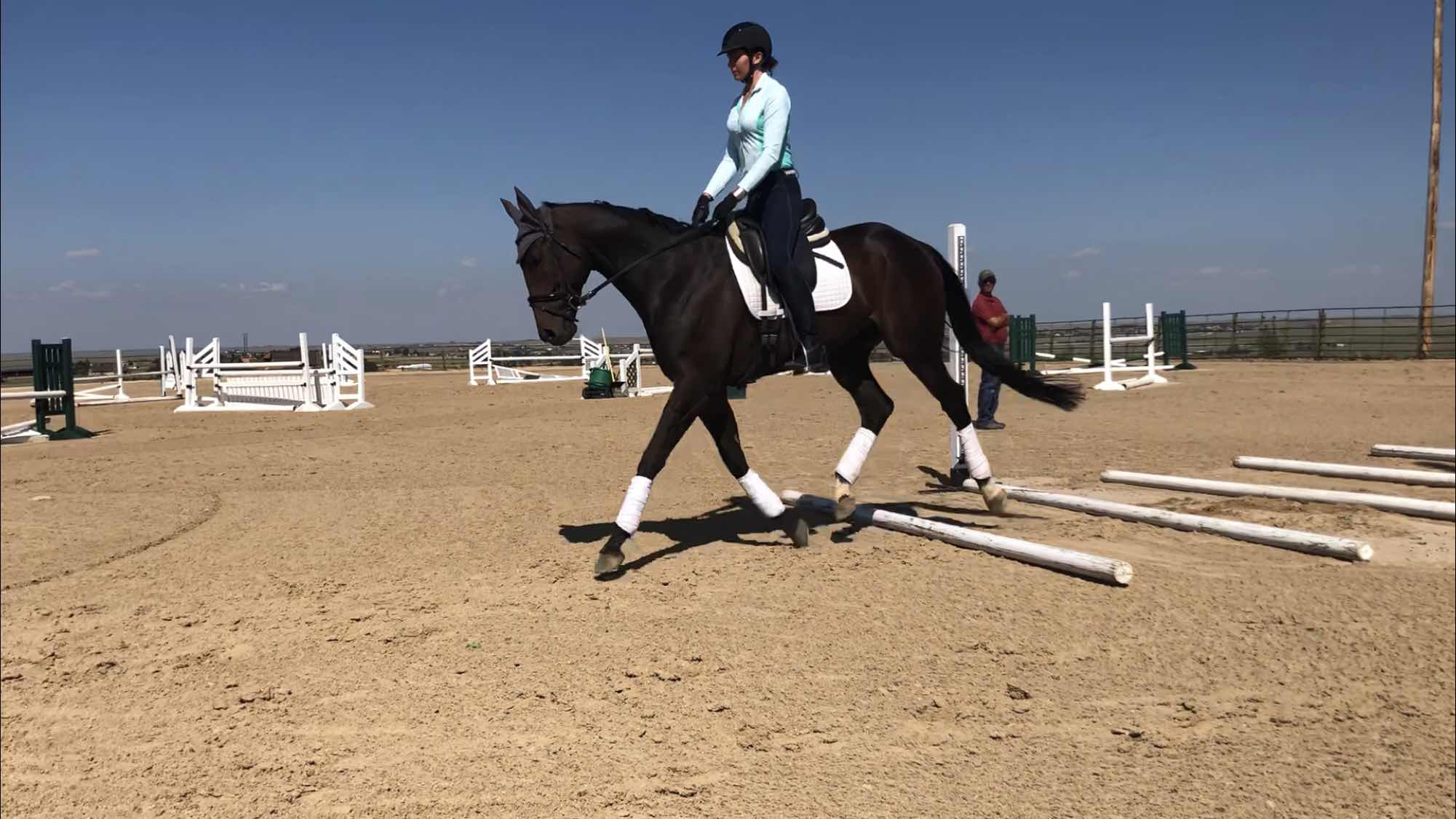 I wasn’t able to get away for shows during the race meet, which we would need to do before going all the way to Lexington. It was time to move to New Mexico for the winter, but they don’t have much for horse shows down there this time of year. I also didn’t want to put Ivan through the stress of moving to Ruidoso, then to Hobbs, and then having to ship back and forth to Lexington within a few weeks. The Fiancé told me that it would be okay for me to stay in Denver until I get back from Kentucky.

Having basically two months where I don’t have to do anything but ride and show one horse has been a bit of a shock to my system after having 95% of my energy go to a barn full of racehorses almost every day for nearly a decade. I seriously had no appetite for a week after they all left. Not because of stress, just restlessness. I’ve adjusted now and I’m having a wonderful time with my boy. We’ve had our rough patches, but he truly amazes me. 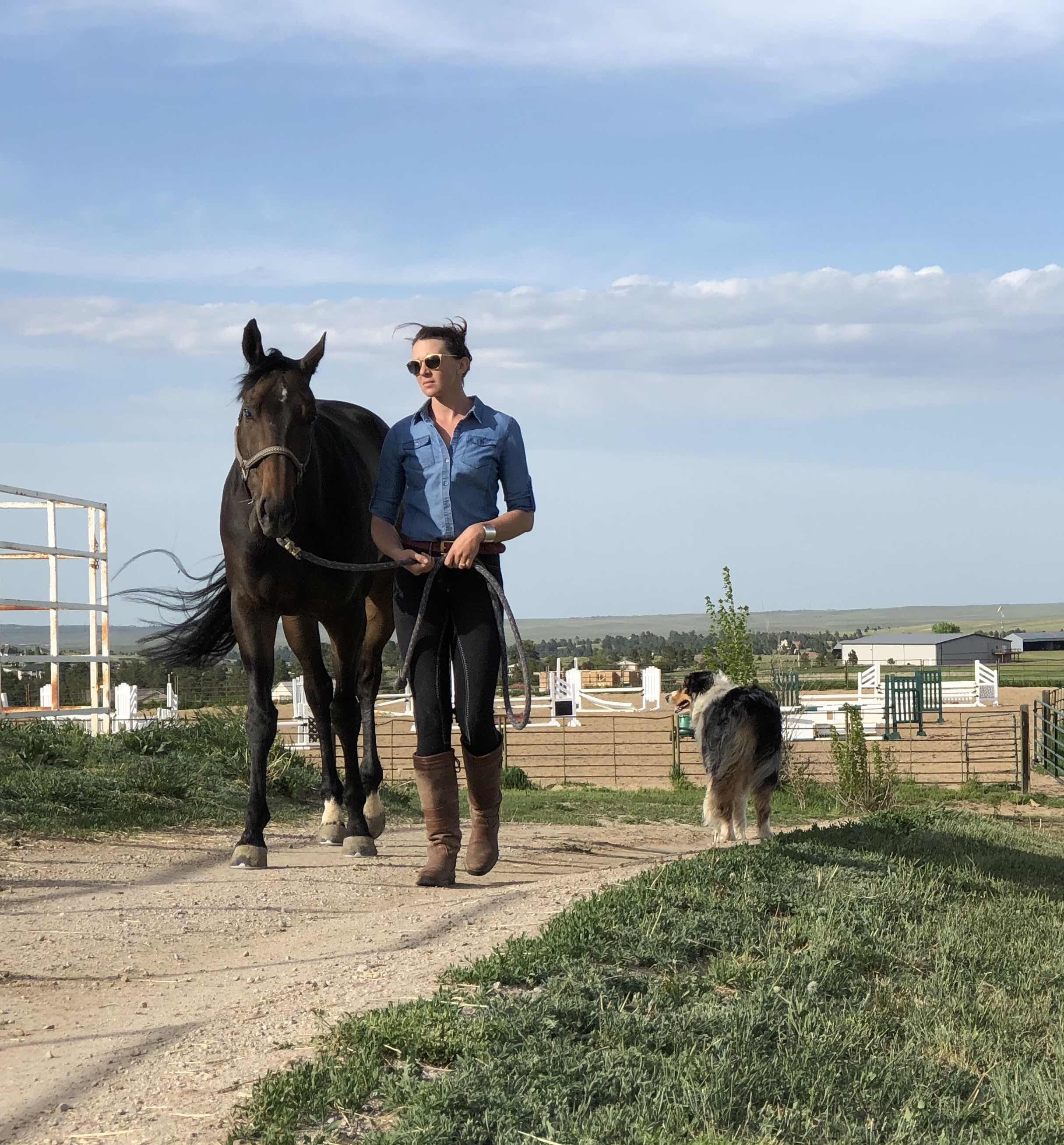 Now that I have time, I’ll post about Ivan’s first dressage show soon.

*A huge thank you to Dr. Bessire of Brock Veterinary Clinic in Lamesa, TX. She is not only a wonderful vet, but was very kind and amazing about communicating with us. The care that Ivan received was amazing and he was truly happy every time I went to visit him. You could tell that he was getting groomed regularly and received a lot of attention. He became a much more affectionate horse while he was there.