About that birthday present....

So he technically wasn't intended to be a birthday present, but that's just how the timing worked out and that's kind of what he ended up being. Either way, he's mine.

Anyway, Question (by Whywhywhy out of a Dayjur mare) isn't exactly new to me. If you've read this blog for any amount of time, that picture probably looked kind of familiar to you.


We trained him off and on for an owner for a few years before he was claimed last year.
He's not a great racehorse, but he is (or at least was) a good mid-level horse. He's what we call a check-getter, meaning he has a high on-the-board percentage. In short, he's honest and rarely throws in a real clunker.

Most notable highlights during the times we had him:


Anyway, being at the track, I've learned that you have to be willing to let horses go because you never know what will happen. When Question got claimed, I didn't cry or freak out, but losing him bothered me more than it should have. At the time, my fiancé said that Question would probably end up running for $5,000 or less (way less than half of what he was clained for) here next year (I'll explain that guess in a minute). He said that if he was, it'd be worth considering taking him back. 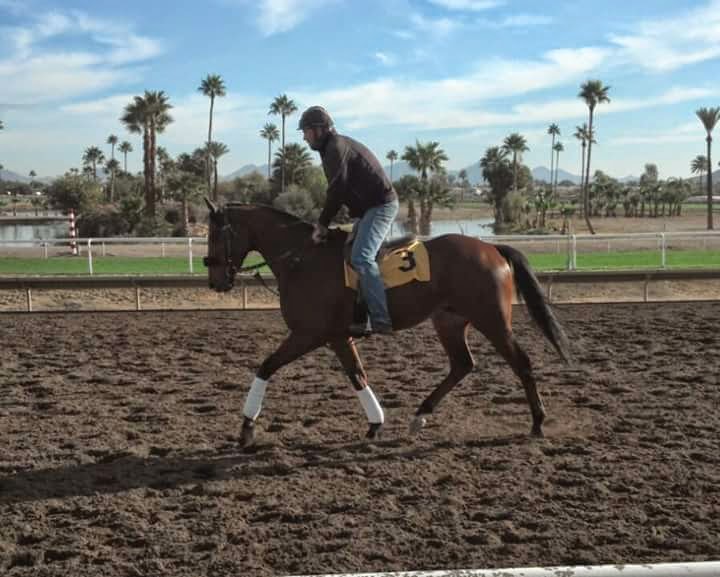 So how did my fiancé know? Question can be a real ass. He's not mean or anything like that, but he is a bit of a bully. If he can intimidate someone and get away with stuff, he will. He is quick and strong and can do bad things before a person even realizes it.

Best Example:
We had a jockey work Question a couple of times and warned the rider to never completely let his guard down. The rider thought we were crazy because Question is actually really nice to ride for the most part. He's not spooky or a runaway and he does everything right. He did everything perfect the first two times. 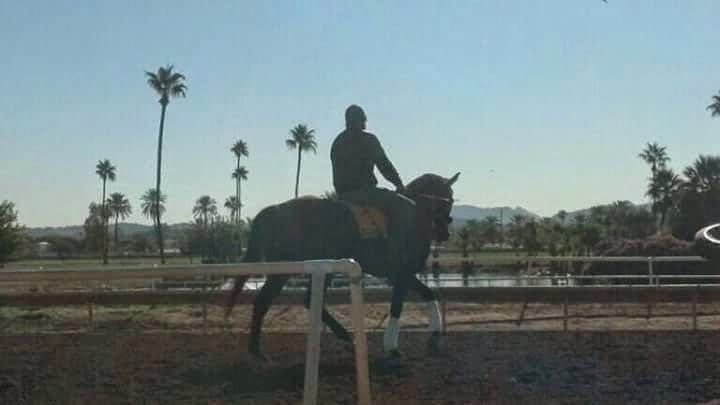 The third time was pretty much the same story, and the rider just had a loose rein as they were starting to walk off the track. Question, out of nowhere, lets out a squeal and does what looks just a bit worse than a crow hop. However, he was so quick and he is so powerful that he sent the rider flying. The poor guy was not only really high in the air, but he also landed a rather impressive distance in front of the horse.

This is where most horses would take off. Question just stood right where he was, the reins dangling, and looked at the rider like "Dude, I SO got you. Just because I could." That is his mentality. Keep in mind that Question had just worked a pretty decent time for five furlongs and should have been tired enough to not pull that crap. Obviously, he wasn't.

There are many other things that Question does to be a pain in the ass. He is absolutely horrible to get ready on race days. One time, the fiancé was gone and I had to get Question ready for a race by myself. I must have looked like I got hit by a bus by the time I was done. I called the fiancé and told him that if he EVER made me run that horse by myself again, I would quit (not really, but I was pretty pissed off by that time). The most annoying best part is that once you start to head for the paddock, the horse is absolutely perfect. *Question did get a little better to get ready eventually, but it took a hell of a lot of time.


Question can be really pushy and obnoxious if you don't get after him, he can get wild jogging back after he gallops, and he loves to buck and play on the walker to set the rest of the horses off.

All of this combined with a long lay off and huge price drop (HUGE red flags) ...so why was I dumb brave enough to still claim him?

First off, we had enough current information to know that he wasn't completely crippled. We knew he could be obnoxious enough to make someone want to get rid of him. We also knew that he wasn't really fit and that he isn't an easy horse to get fit to run. However, for all of that, it was still worth the risk. I don't know, I guess I just have a lot of respect for this horse.

He may be an ass, but I still adore him.

"He's NOT a very nice horse!" *pouty voice*- Question's groom as I get ready to lead him away. At least the kid wasn't upset about losing him...like, at all.


Question is about the most athletic horse I've ever seen (and that's comparing him with Grand Prix jumpers at the farm I worked for in Toronto and Ocala). He may be an ass in the mornings, but when it comes to down to race time, he shows up. I don't think there has ever been a time when I felt like he flat out didn't try. If he got beat, I always felt like he had a legitimate excuse or it was a rider and/or trainer error or he just got beat by better horses. He has heart, he's athletic, he's powerful, and he's actually bold when it comes down to it. Okay, he's a little cocky too. On top of that, he is a very good looking and well built horse. 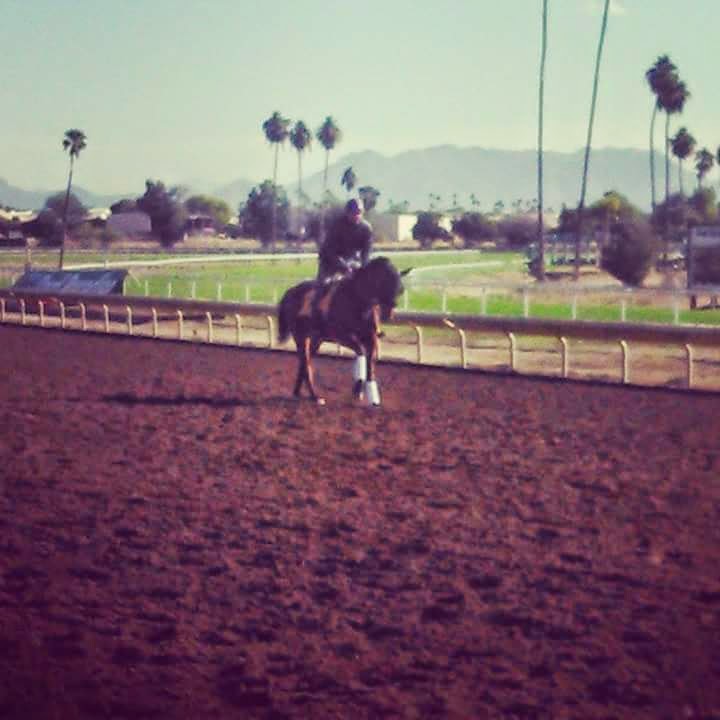 Anyway, for better or worse, I talked the fiancé into claiming him even though he had his doubts. Like I said before, Question wasn't fit, and he ran horrible. My heart about jumped out of my throat when he was eased even though he still finished the race (this is around the time that the fiancé decided he was my horse instead of "ours"). I figured that it wasn't anything too horrible when he was still putting full weight on all four legs. He walked off of the track and didn't look too bad. I felt a lot better when he went to jumping and bucking while he was cooling out on the walker.

There are some things to fix (mostly fitness and strength related), but he isn't lame.He doesn't need time off and we were able to continue with his training. I don't know if he will run well again after that race or not, sometimes they don't after that kind of experience. I think he will. If he doesn't, I will retire him while he's still sound.

It's always been my dream to have Question move onto a jumping career. I know that he can jump (you don't even want to know what makes me think so). He already has a solid foundation. He could easily do a training level dressage test correctly (as long as he doesn't get the urge to plant you), and it wouldn't take much to get him to first. He knows his changes and he isn't scared of anything. 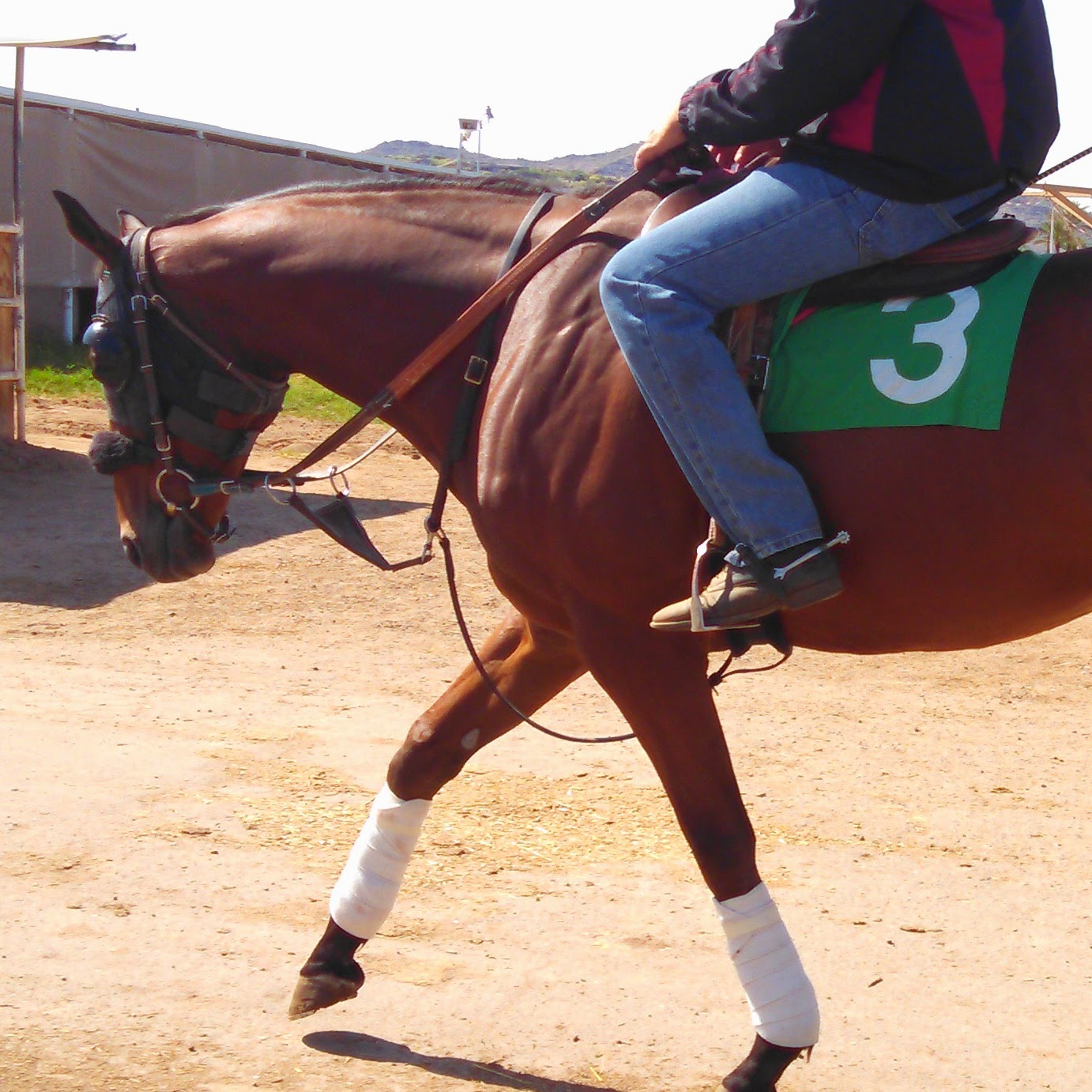 I don't necessarily want to be the one to jump him (he would deserve better and braver), but I could polish off the flat work and then hand someone else the reins. I've always thought it'd be cool to own a nice jumper if I can afford to. If I can't, then I know a couple of people that could handle his shenanigans and would gladly take him (this is realistically what will most likely happen). In dream land, he would win enough money that I could retire him and afford to own him through his second career (almost 0% chance of this happening). In reality, I'll consider myself lucky if he can win a couple more races. 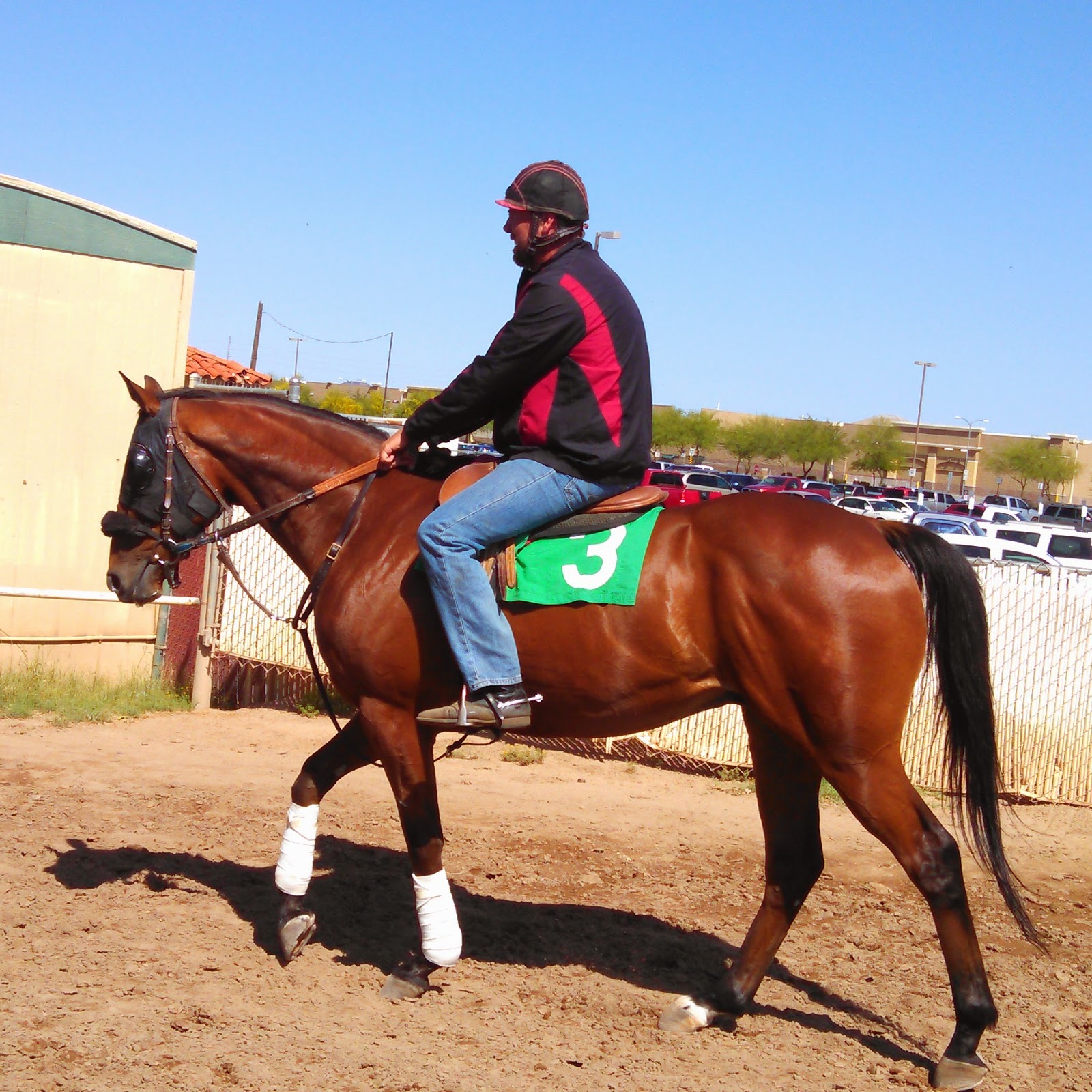 So, that's probably the most unromantic "I got a horse for my birthday!" story you've ever heard..... I still like my "gift"! (:

Anyway, I normally wouldn't go into this much detail about a horse we have in training. Since he's mine I can do what I want. Plus, I'm pretty sure I'm the only sentimental idiot dumb enough to claim him anyway. No one else on the planet is going to look at him, think he can probably jump if he can't run, and drop on him.

Whatever, I have to play tough-ass racetrack, behave like the men, chick all of the time.  I'm allowed one moment of girly weakness right? #noregrets

On a good note, at least his name is appropriate.