Everyone, meet Summer Meeting. He is a four year old off the track thoroughbred by Cause Ur Mine (Giant's Causeway) out of a General Meeting mare. He last ran February 22nd, ending his career with 14 starts and 4 wins. Summer was a gift, both literally and figuratively speaking. 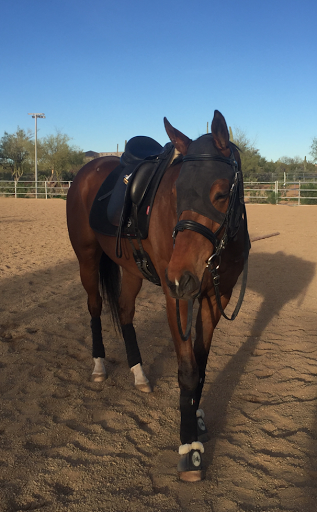 Summer AKA #themaskedbandit
I'll get more into the details of Summer in another post, but I wanted to talk about what it's like to be riding an OTTB straight off of the track again and how he reminds me of what is important every single time.
RIDING THROUGH
When I first started riding Beefheart after he retired, I made a lot of mistakes. I didn't use enough leg, because he was naturally sensitive and forward. I didn't keep enough contact with his mouth, because he stayed in a frame and was super light in the mouth. Doing less seemed like the kindest way to start him out, but it certainly wasn't the best way to go and created a lot of issues down the road. I left a lot of holes in his foundation. 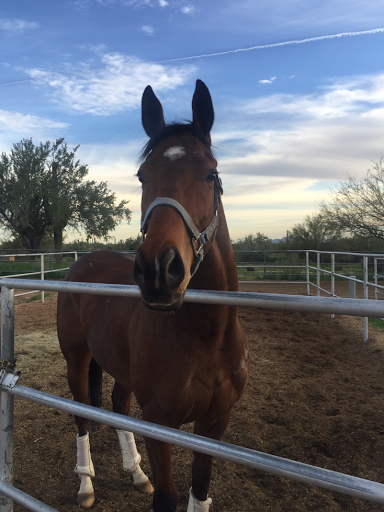 Love his sweet face!
My first ride on Summer, I tried to make sure to keep my leg on and to keep focusing on getting him to step up into a contact. If he wanted to drift over his outside shoulder, which is a pretty common problem with horses off of the track, I increased my aids to make sure that he stayed as in front of my leg as possible, focusing on keeping his hind end active without quickening. I'm lucky in that he naturally keeps a fairly steady rhythm and tempo. Summer still drifted a little on the circle, but not nearly as bad as he would have if I had taken my leg off and tried to guide him with just my hands. He didn't pull or get iron jawed and stayed in a fairly steady frame as long as I rode well enough (easier said than done). It wasn't perfect, but there is definitely a lot of promise there. 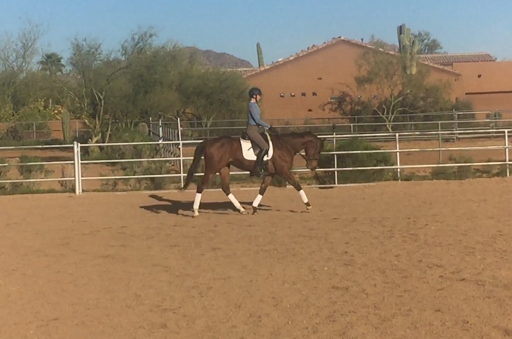 After a few more rides.
TRANSITIONS ARE MY BEST FRIEND

Here was another mistake I made with Beefheart. He did pretty good transitions from the get-go, so I didn't do enough of them. We would just kind of get into cruise control and go several minutes without doing a full transition.

After a few rides on Summer, he started to try to pull down on me. It wasn't bad and he wasn't trying to run off, but I could feel him just daring me to pull back on him. I tried to focus on keeping his hind end active in the gate we were in, but that didn't always work, so we started doing LOTS of transitions. A quality transition along with some well-timed half halts did the trick. I couldn't do too many. Again, it is all about being very conscientious to keep his hind end active in the transitions.

I was riding Summer in the arena one day and was getting way too caught up in the training aspect. The Fiancé stopped me and said, "Come on, let's go."

He opened the gate and Summer and I followed him onto the track that goes around the outside of the property. We walked on it, then toodled around the trail course some. I trotted him on the track a little and then we walked around on it to get back to the barn. 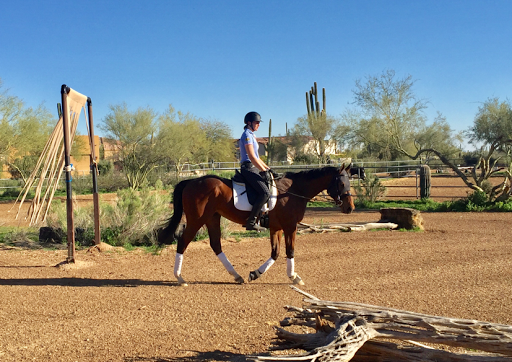 Car washes are meant for Summer.
Afterwards, The Fiancé reiterated the fact that even though Summer was dead fit for racing, our dressage work is a whole different group of muscles and riding in the arena for very long is tiring for him. He said I need to make sure to do lots of serpentines (rather than too many circles), both shallow and large in the arena, and that I need to do some straight work along with some shallow serpentines on the track every once in a while too. As much as it pains me to admit it, he's absolutely right. It's not right or healthy to take a horse straight off of the track and constantly hone on their training in the arena. Especially, with a horse as kind and willing as Summer.
IT NEVER HURTS TO KNOW HOW TO GALLOP

I really don't like galloping at the racetrack. It's not the horse, but the traffic that gives me anxiety. To me, it's about like driving on a freeway with way too many idiots and jerks. Yeah, there's a lot of people that obey the rules and pay attention, but it only takes one ignorant asshole to get you killed.

That being said, knowing how to gallop helps a lot when you're riding an OTTB. I never take a cross on one for training purposes, it could easily become too tempting to use it to force a frame instead of developing one correctly. However, knowing how to use one when things start to get a little out of control can come in handy. 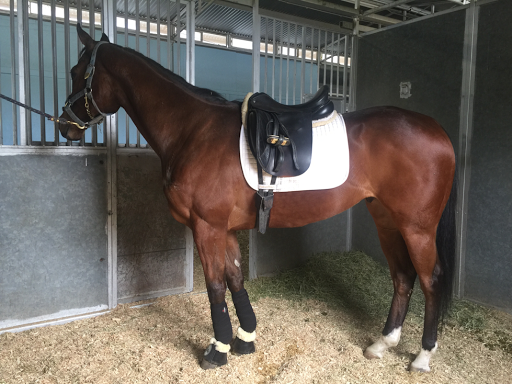 He's so cute! Don't worry, I bought him a better fitting girth after having to make due for a couple of rides with this one.
Summer is pretty solid guy, he's not spooky and is rarely reactive. Still, he's only four and not entirely bombproof yet. The other day, a bird flew out of a barrel right in front of him. He ducked sideways and then bolted. I had just gotten on and was walking him on a loose rein when Tweetie decided to make an appearance. As he took off, I was still scrambling for my reins. He didn't go more than a half a lap before I got him to come back, but if I hadn't known how to take and use a cross, it could have been a lot worse. Summer had just raced less than two weeks ago and I would have never had the strength to stop him if I had just pulled back on the reins.

I was extremely blessed to be gifted a horse with such a great head on him. It keeps it fun. It can also make it easy to put too much pressure on myself. He was going so well from the beginning that I started getting down on myself if I felt like he didn't make enough progress during our ride. I'm always proud of him, I'm a HUGE hardass when it comes to me. Trying be as perfect as possible can end up putting more pressure on him too though. Once again, The Fiancé chimed in and told me there is no pressure, just have fun with him. Damn it! Another time he proved himself wiser than I ever wanted to have to admit. 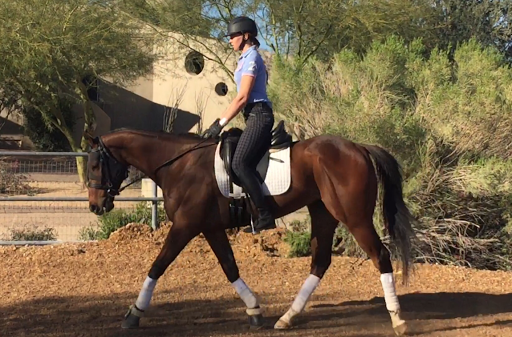 It's more fun outside of an arena!
*On another note, TF wanted to get on Summer one day to see what he felt like. He said that I've done a good job with him. The man doesn't say anything he doesn't mean, so I glowed a little with pride on that one.

YOU DON'T HAVE TO HAVE AN IDEAL HORSE

Summer isn't very tall. He's 15.1, yet he's broad and deep enough that my 5'11" frame doesn't look completely ridiculous and my long legs don't go down to his knees. I've never minded riding a smaller horse as long as they had some substance to them. When a lady at the barn told me that Summer was the perfect height for me, it made me chuckle a little. I just hadn't expected anyone to say that. 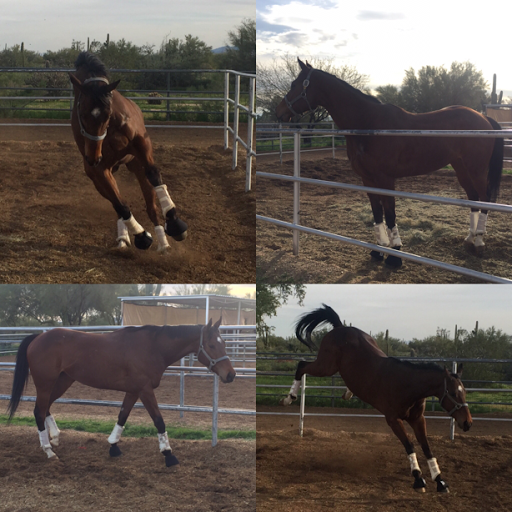 He thinks that turnout is the best thing ever.

Summer may not be tall, but he is strong and athletic. He has a really good mind. He's EXTREMELY smart, but uses it in a way that makes my life easier instead of more difficult (unlike a certain elephant-horse I know). He's taken everything I've thrown at him in stride and has never lost his cool (the bird incident doesn't count since he went right back to his normal self right after). He may not have "10" gates, but he has solid gates that will be able to be improved because of all of his other good attributes. Summer is cute and he's fun. The horse is kind, willing, and forgiving. I may make a thousand mistakes throughout the training process, but he's not going to hold it against me. Summer is ideal in all of the ways I need him to be.

As the Oh-So-Wise and honest to a fault Fiancé has said many times, Summer is a nice horse. I guess I'll have to admit that he's right AGAIN.