The fiancé and I had a good week. 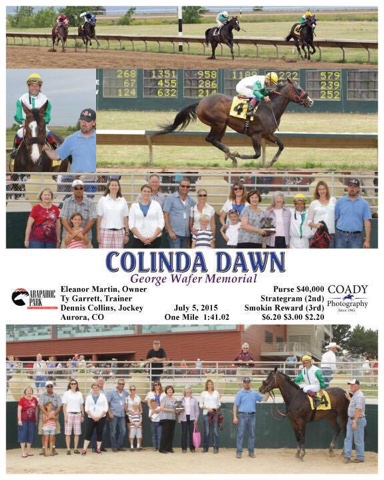 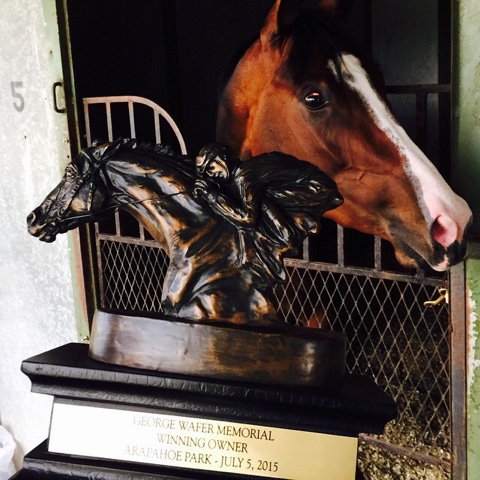 Colinda went to the lead out of the gates and ended up winning by 2 1/4. Dennis, her jockey, came back and said that she was still looking around at everything (she got herself beat by a half length in a stake in Phoenix because she was convinced she saw dragons in the infield). You can see in the replay that she is just out there screwing around. That doesn't mean I'm any less proud of her. She was barely even tired after the race and it was her first race off after we gave her a 30 day break, 85 days since her last race. I told the fiancé and Dennis that I'd rather she do it easy and be messing around than be all out to win. 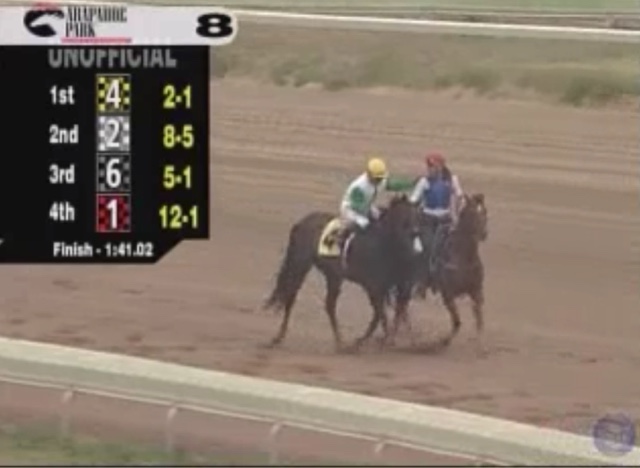 Colinda coming back with outrider and friend, Haley.
The fiancé decided to nominate her to the Colorad Derby for the following Sunday just in case she came out of the George Wafer really good AKA breathing fire. She did.
I was fairly certain Colinda would run well in the George Wafer as long as we had her fit enough. The Colorado Derby made me nervous because the colts and geldings she would be running against were quite a bit more accomplished than the fillies she beat. Plus, Colinda is speed and almost the entire field was speed.
What made me feel a little better is that she trained like a monster the day before the race. That still doesn't mean we went into the race overconfident. 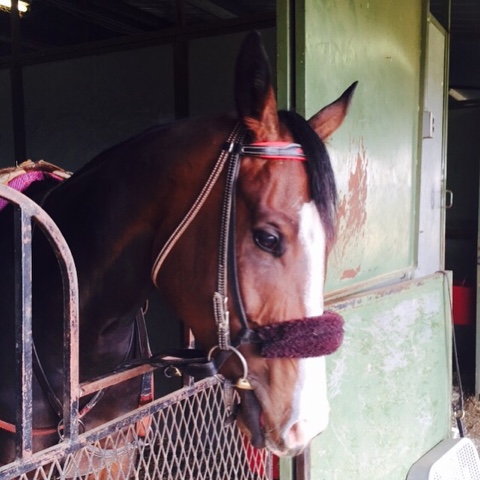 Such a diva!
It turns out that I didn't need to worry. Colinda went to the lead and never looked back. Dennis said it felt like they were out for a two minute lick when he was on the backside and that was with her going a fairly good clip on a fairly slow track. She pulled away from the rest of the field to beat the boys by 9 lengths. 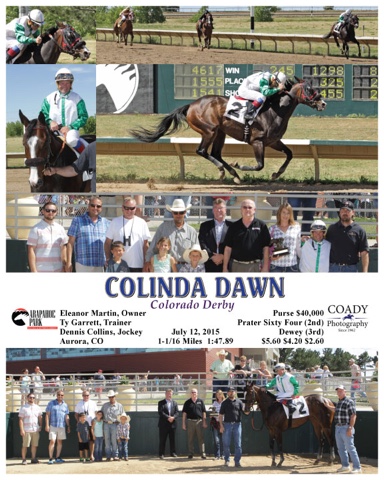 Watch Colinda's Colorado Derby win here.
Now, when you do something like win a stake with a filly and enter her back in another stake against the boys to run a week later, you're going to catch some crap. People will think you're greedy or cruel or both. They don't know Colinda and they don't know my fiancé. Colinda has fire running through her veins and  she LOVES her job. The fiancé is very conservative as a trainer and he especially isn't going to risk hurting, as I refer to her, "his princess". Colinda has way too bright of a future to take an unnecessary risk or enter just to run. The fiancé thought she had a good shot at winning it, he wouldn't have bothered if he didn't. 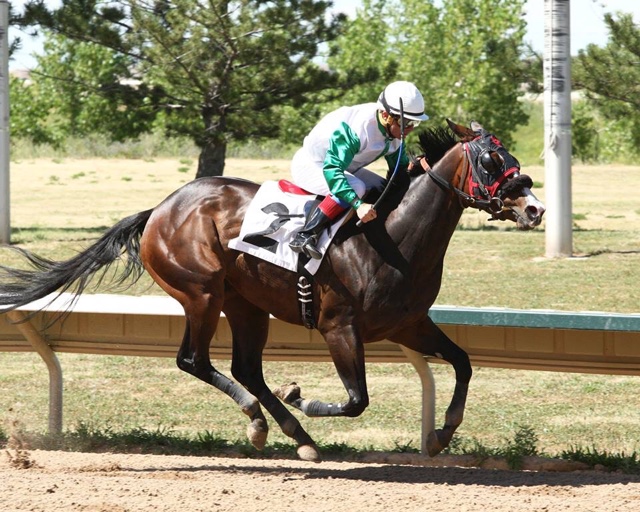 PC: Coady Photography
Like I told one lady that admitted to thinking Ty was crazy initially, she came out of the Wafer on tilt. It was either work her or run her, might as well run her.
Thank goodness Colinda and Dennis (who didn't doubt Ty at all) put all doubts to rest. She didn't just win, she did it impressively. 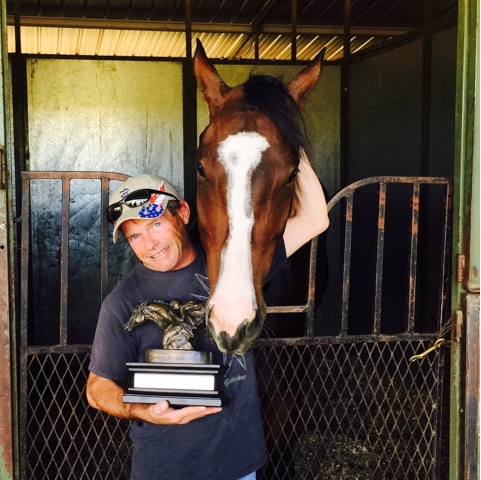 Colinda and jockey, Dennis Collins.
Dennis came back from this race saying that Colinda still wasn't completely focused. She did seem like she put a little more effort into this race. Dennis had to keep getting after her a little, not to keep her going, but to keep her from losing too much focus down the lane. Colinda trains well in the mornings, doesn't do anything wrong. There's not much we can do to make her more focused on race day other than let age and experience take it's course. Colinda is perfect in the paddock, post parade, and gates. She doesn't do anything wrong, just isn't 100% professional when she hits the lane on the lead yet. In the meantime, I'm still as proud as can be of her and hopefully her talent continues to make up for her distracted moments. 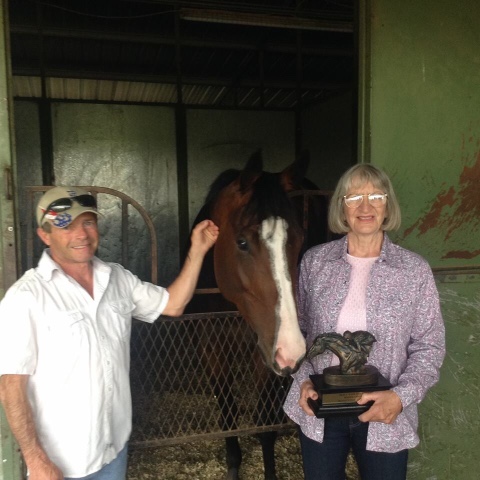 Colinda with Dennis and owner, Eleanor
The fact that Colinda won a stake coming off of a layoff and then came back a week later to win another stake by even further against a tougher group is impressive. She gave us everything we asked of her and more. We're very lucky to have her and that she has an amazing owner!
Thanks to Colinda the fiancé is now ranked 6th by earnings and tied for 8th for wins. That's with only 11 starts. I'm not bragging at all. Racing can be very hot and cold, I'm extremely grateful to have good horses that are running well right now. 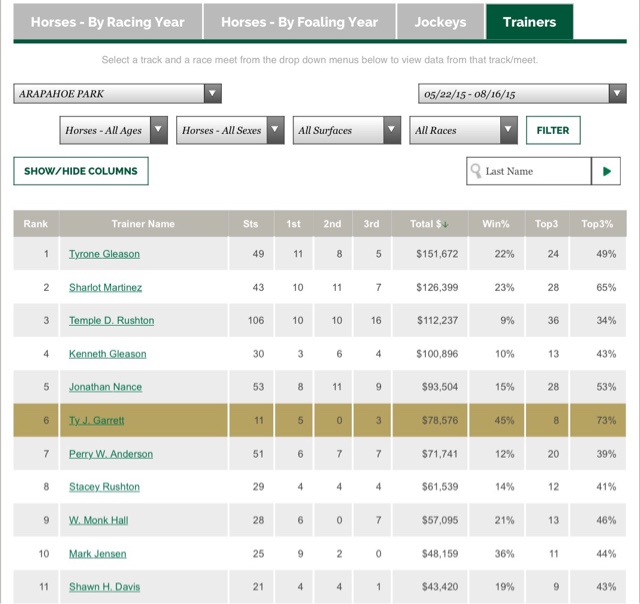 Also, Colinda is now ranked 1st by earnings. She probably won't stay there because there aren't anymore stakes for her here and there are a couple of $100,000 dollar stakes at the meet (that she can't/won't be running in), but it's still nice to have her there for the time being. 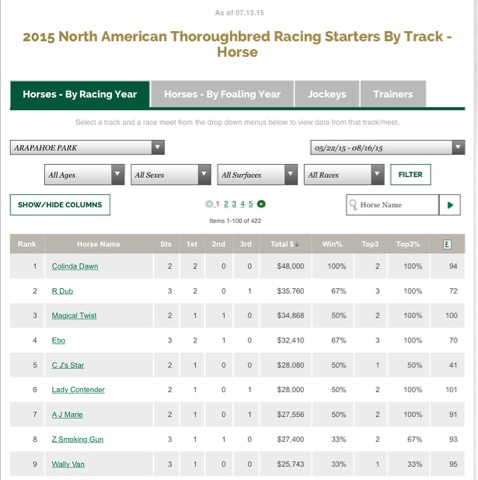 *I may have made it sound like Dennis isn't happy with Colinda. That couldn't be further from the truth. He absolutely loves her and stops by everyday to pet her. When he says she's not focusing, he isn't complaining. He's just saying that if she can do this with being distracted, just think what she can do if she isn't.
Posted by Jodi at 3:01 PM