I don't even know where to begin on our trip to Lexington for the Breeder's Cup, so I'll just get to the best part (and probably the only part that most people care about): American Pharoah. 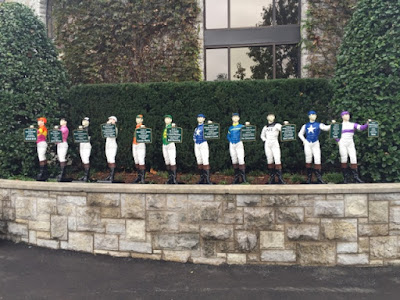 I'm not exactly one to get mushy over Bob Baffert, but no matter how a person feels about him, no one can deny how truly amazing American Pharoah is.

Let's start with his last work to prep for the race:


Yeah, when a horse of his quality works like that, in that time, that easy....well, it's a little hard to see them getting beat. Watching this put any doubts after his defeat in the Travers to rest. The Triple Crown winner was not only back to looking like his same old extraordinary self, he may have possibly looked the best he has in his entire career. 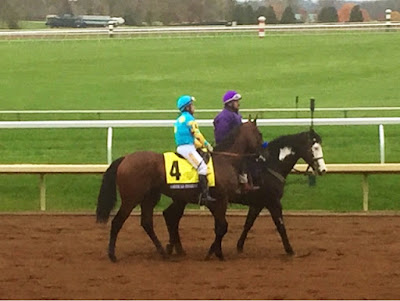 Sorry about the blurry pics, I was more concerned with watching than quality pictures, so it was a point in the general direction and shoot kind of thing.

In the post parade, even if you had no idea which horses were in the race, AP looked like the winner (I was about thirty feet away from him). He was calm and relaxed, pure class. His weight was good and his coat gleamed. Most of all, he oozed confidence. Everything about him gave the impression that there wasn't a horse on the planet that was going to beat The Champ that day, much less one in the race. 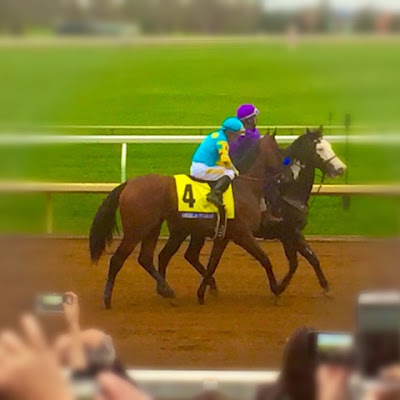 When it came to Espinoza, I got the feeling that he didn't have a care in the world. It didn't seem like he was cocky, he definitely didn't come across as nervous. More than anything, pride for the horse underneath him was shining through. Everything about Espinoza's demeanor said "I'm on the best horse in the world and he's going to win this. I'm just here to enjoy my last ride on him."

I'm sure you all saw the race. A few jumps out of the gate American Pharoah was just galloping along with his ears pricked while the riders on every other horse in the race seemed to choose riding for second rather than risk it all going hard after AP. It probably wasn't a bad decision on their part. 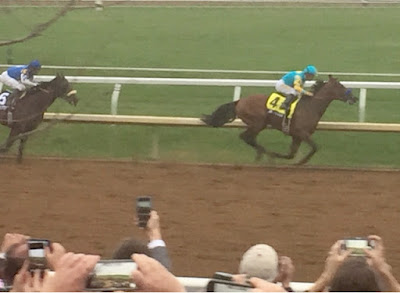 American Pharoah winning the Breeder's Cup Classic after winning the Triple Crown was impressive. The fact that he did it so easily while setting the track record was absolutely incredible!

*The value of the track record was initially questioned  by some because track records are reset when the track surface is changed. Keeneland went from dirt to synthetic back to dirt. When it was discovered that American Pharoah had run the fastest 1 and 1/4 mile EVER, over any of the surfaces at Keeneland, the different footings became irrelevant and his feat became even more extraordinary. 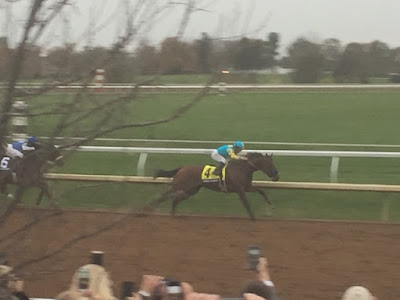 Y'all just sit back and watch while I make history.

I doubt that I can ever describe what it was like to be that close to American Pharoah as he ran past me towards such an amazing victory. I don't remember the cheers of the crowd or hearing the race being called. The one thing I will always remember is seeing what true perfection of a thoroughbred running looks like. Every detail of the grace and athleticism of American Pharoah as he soared by will forever be ingrained in my mind. I will remember that moment for the rest of my life. 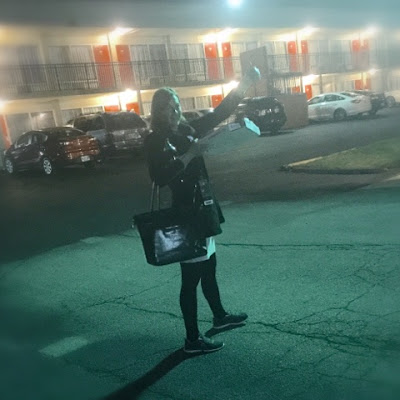 I don't know if I was still high on watching AP, if it was the bourbon, or if being out of those heels and carrying a pizza, but I ended up looking like I was hitchhiking in front of our (ridiculously overpriced) crappy hotel. I was attempting to sum up exactly how awesome the day was.

I'll cover the rest of the trip in my next post.